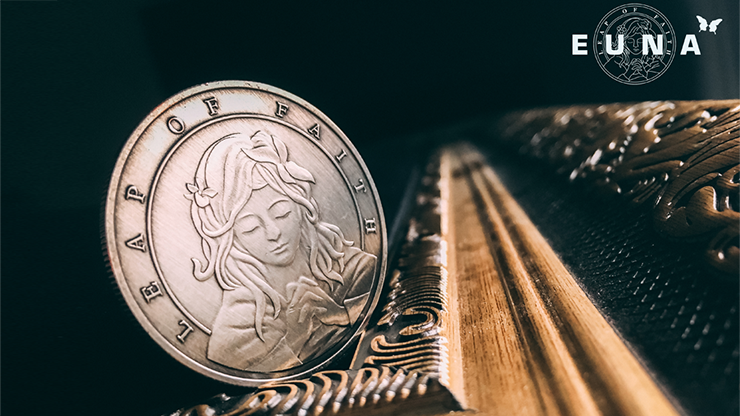 Coins built specifically for visual magic. Smooth edge design that is untraceable except by your touch. Silent when rubbing, yet a crisp echo to enhance performance. Bigger and thinner than the typical dollar to be more easily seen. Weighted to minimize effort when doing your favorite sleights.

Modern coin magic has shifted toward visual mystery that people can see. With popular social media platforms, magic artists with their insane visuals can be seen by the whole world overnight.

Built from scratch. EUNA not only has the perfect weight, size, color, thickness, texture, and design for modern artists, it carries one special property that no other coins offered in the past. It's designed to be FRICTION-FREE to for visual coin techniques.

40mm in diameter and 2mm thin. Although modern coin magic has shifted toward using less coins for visual clarity, a few of these large coins will provide enough visuals to stun spectators.

The best part is that it is still heavy enough to feel like a real coin. No more arcade vibe coins!

EUNA has metallic finish while being extremely reflective, so it can be used in both close-up and parlor situations, making sure everyone can witness the beautiful lie before the magical truth.

While retaining its beautiful design, EUNA has a smooth texture. No need to soften it out because the coins don't talk from the very moment they're removed from the box. Extreme smooth texture of the metal itself also allows certain moves to get executed with minimum effort (i.e Blow Vanish by Zee).

The design. It reflects inner conflict within artists' mind and life.

The design... It is a symbolic masterpiece that you can hold in your hands like an amulet. Like how Will Tsai became a worldwide sensation with one video clip and like how a nobody like Zee became the face of the modern coin magic. Regardless what others say, having faith and taking a leap toward it can completely change your life.

To further serve your taste, we have decided to produce two different colors of EUNA. Standard EUNA is white as snow and always extremely reflective. Moonlight Edition of EUNA is darker overall for low profile performers but reflects like a mirror when needed, so you can leave impeccable retentions in your spectators' brains.

EUNA makes the Blow Vanish much easier and faster, so we have decided to include Project Z when you purchase the EUNA set!

Are you ready for your own destiny?