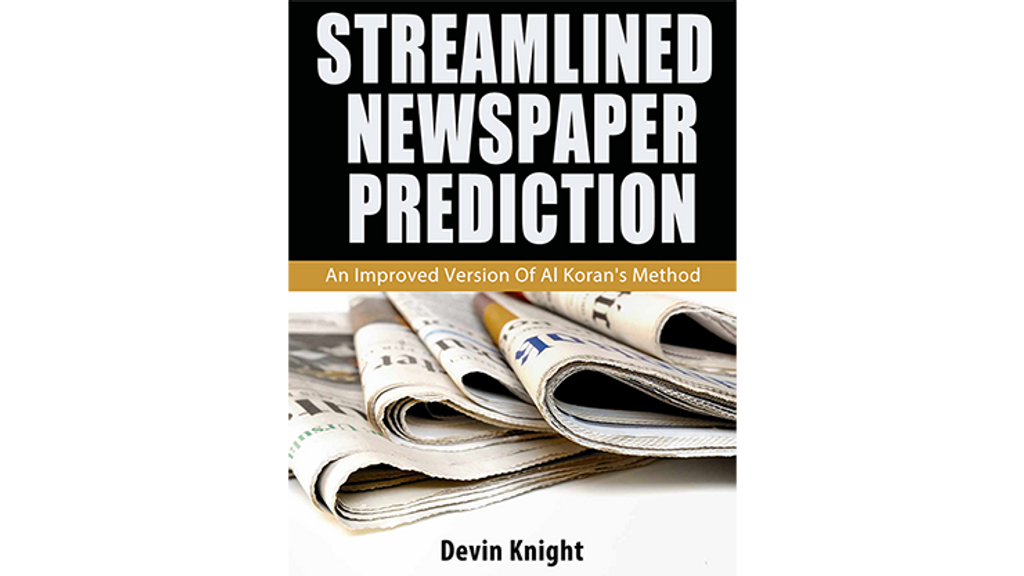 The HOLY GRAIL of all newspaper tear predictions. Even Al Koran would have been amazed, if he knew of this version!

Are you one of the thousands of magicians who have tried to learn one of the newspaper tear predictions and threw up your hands in frustration trying to learn complex tearing systems and trying to memorize confusing sequences of tears?

That is all about to end with Devin Knight's amazing streamlined tear, which you can learn to do in just a few minutes. You can do this without having to memorize complex tearing tables or do complex math in your head, as with almost every other method you may read in books.

No wonder this great effect is seldom seen or performed. It is just TOO difficult to master for most magicians and mentalists... UNTIL NOW! Now, it is so easy to do, you will amaze yourself!

Effect: The performer announces that, prior to the show, he wrote a prediction on a slip of paper. He shows the audience this prediction and places it in full view on a table before the effect begins. Any spectator is invited to help. No stooges, instant stooges, or pre-show work.

The participant is asked to think of a number from 1-16, but not to tell the audience or say it aloud.

The participant is then shown an ungimmicked sheet of newspaper. The performer then tears that newspaper sheet in half four times, resulting in a stack of 16 torn papers. This stack of torn pieces is placed on a table in full view and you never touch them again! Your participant then announces aloud to the audience, the number he thought of. NOTE THAT THE NEWSPAPER IS TORN INTO 16 PIECES BEFORE THE PARTICIPANT ANNOUNCES HIS NUMBER TO THE AUDIENCE.

Your participant is then asked to verify that the torn piece has words printed on both sides. There could be an article on BOTH SIDES! He is then asked to freely choose either side to read from. He is asked to look over that side and call off words that would be unique to that article. Names of people, numbers, company names, etc.

As he calls out this information, the performer writes the words named on a large piece of cardboard, so the audience can see and remember the words.

The prediction slip that has been in full view is opened by your participant and read aloud to the audience. Written on the slip of paper are the random words your participant just called out!

This is one of the strongest and most impossible-looking prediction effects you will find. Strong enough to close a show.

NO DUPLICATE PIECES, NO SWITCHES OF THE TORN PIECE, NO NAIL-WRITERS, NO SECRET WRITING AT ANY TIME, NO COMPLEX FORMULAS TO LEARN, NO SPECIALLY PRINTED NEWSPAPERS. Use any borrowed newspaper.

Believe it or not, this streamlined tearing key has been reduced to just 4 rows, consisting of only 4 numbers! This cue list can be easily hidden. All it takes is one quick glance to know how to quickly tear the newspaper into 16 pieces. So easy, so simplified, that you can almost do the tears without having to think about it once you grasp the basic concept.

NO NEED TO HAVE A CUE LIST EITHER. Devin shows you how to easily remember these 4 rows, with 4 numbers. IF YOU KNOW THAT A DIME IS WORTH MORE THAN A PENNY, then you can memorize this cue list in just a few minutes. This streamlined system is so easy to use, you will marvel over how Devin created such a system that works infallibly. If you don't want to memorize, then just have the 4 rows on a small card that can be about 1 inch in size. It only takes about one second to see what you need to know!

Once you learn this, you can do it anywhere using a piece of newspaper given to you. Jot a prediction down and you are set to perform.

"An effortless work of simplicity, it fooled me as I was doing it. And judging from the reactions, I wasn't the only one. This one gets my highest recommendation. It's just that good."
- Shane-Online Visions

"This is certainly one of those pieces of knowledge that, at the very least, doesn't hurt to know and, at its best, can be used as a killer routine in your act. Professionals really won't have anything to lose by buying this eBook. Devin Knight has a pretty strong track record when it comes to mentalism ideas and products. I highly recommend this."
- JHEFF, Marketplace of The Mind