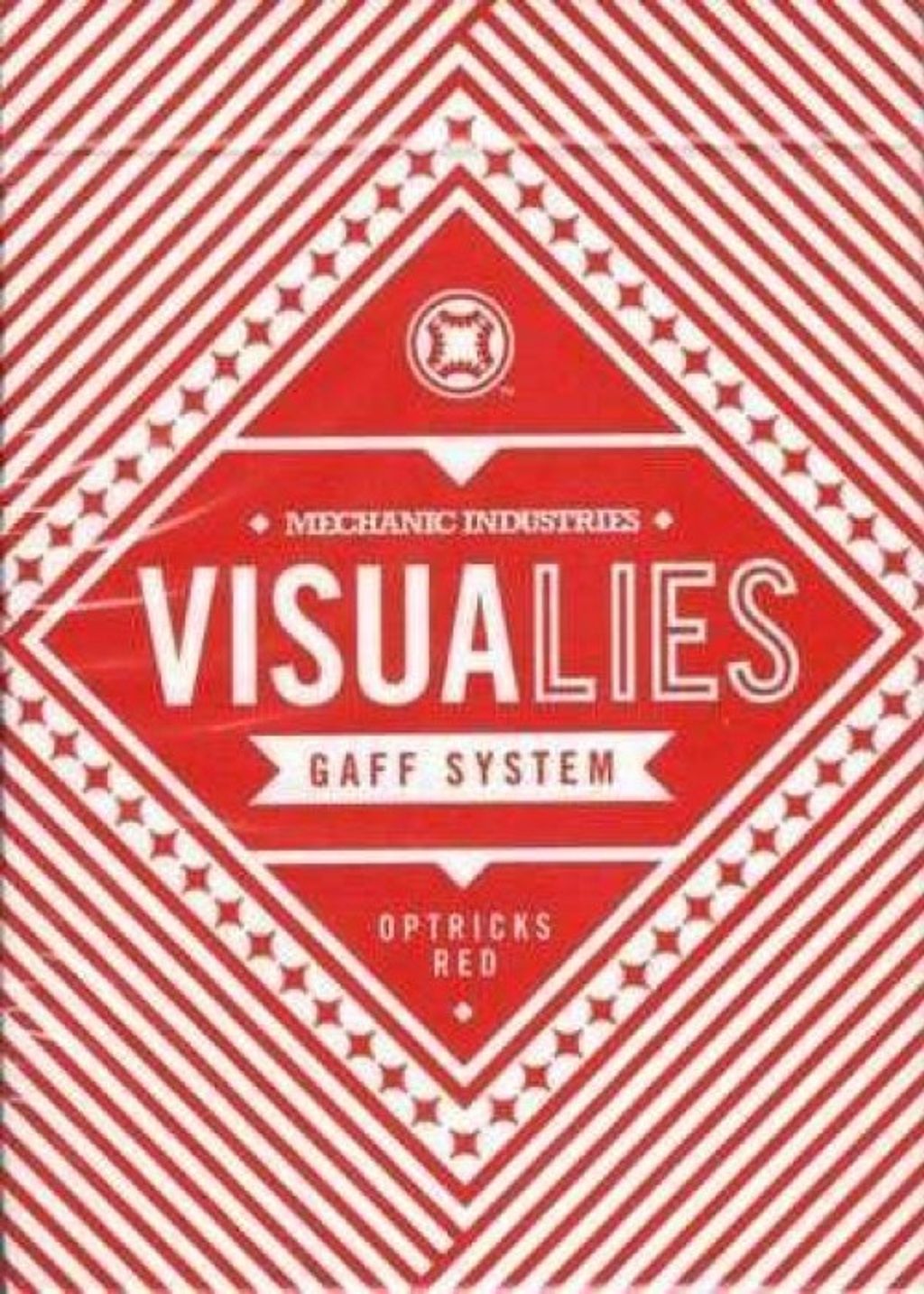 The gaffs from the Optricks Red Deck broke new ground, opening up another dimension of magical possibilities. But we were just getting started. The new Visualies Gaff System picks up where we left off... and then some. This isn't just another gaff deck, it's a whole new system -- a totally new way to approach gaff cards.

It's the perfect extension of the Optricks Red Deck. However, you can use it all on its own, straight out the box with no other deck required. Contained within are 17 core concepts with our trademark visual style. They're not just amazing standalone tricks, you can combine nearly all of the effects into a cohesive routine. Unlike other gaff decks, we've focused on just a couple of key cards, mainly the Queen of Hearts, but also the 4 of Clubs, allowing you to combine the various tricks like never before. There are enough face cards of different values that enable you to spread to show a 'fair' deck, should the need arise.

With this system, we've engineered cutting-edge magical illusions while keeping the handling simple. All of the effects are easily achievable with a bit of practice, regardless of your skill level. We have a host of tutorials that cover each concept and offer easy-to-advanced handlings for each concept. We've also applied the Visualies approach to some classic plots in magic such as Triumph, Twisting the Aces, Transpositions, Sandwiches and Torn & Restored.

TUCK'D UP
Even the tuck case is a gaff! This allows you to display an impossibly looking empty box before producing a full deck of cards from within. An extra gaff card is included that works with the tuck allowing you to transition this unbelievable visual deception from the table to the hands - and back. Easy to achieve yet unbelievable for your audience. Kickstart your Visualies routine as you proceed.

ANAMORPHIC ANIMATION
We've extended the capabilities of the Anamorphic Queen from the Optricks Red Deck. We've animated the Queen, so she now rises through the deck. This will allow you to lose her in the deck, cut to show her in the middle, then riffle to see her visually rise through the deck before popping out into real life! You can also use the varying depths to add multi-layered revelations to an Ambitious Card routine, and more!

ANAMORPHIC BLEND
Show the Queen slowly fading through the deck or magically materializing. Do a color change to show that she sinks directly into the deck before moving on with your Anamorphic routine. A really cool card that has many areas for exploration. Links with many other the gaffs in this deck to extend and add depth to your presentations.

DROP ZONE
Uses the same depth perception technique as the Anamorphic Queen. We didn't want to leave out the Grinder Coin! Think of doing a Jay Sankey 'In a Flash' style trick, but without cutting through your favorite deck. This single card will allow you to show the coin drop through the deck before finding a selected card or popping out the bottom. Works using the same force perspective style and again opens up many possibilities. Morgan Dollar version included, heads side, so this can pass as many coins as it's only seen for a short time.

OMNI COIN
See-through deck effect! Place a coin on your hand, then the deck on top. Instantly you see through the deck before the coin vanishes. It can then be produced wherever or however you like! Designed to work perfectly with Mechanics Grip, there is also a card without the coin to extend the possibilities of this concept. Morgan Dollar version included. It just looks so good!

WARP DRIVE
Twisted warp card to use as an extra phase in your Queen routine. Simply cut out the grey side pieces to create a visual wonder! So many sleights are available that will allow you to spin the Queen and it looks like the card melts and warps around! Give it another twist and it goes back to normal... then move on with another Queen Gaff routine. We've included 3 warp cards of varying values and configurations to offer maximum flexibility.

SANDSPOSITION
A sandwich routine with a transpositional twist. You can casually spread the sandwich both ways and the 6 remains hidden. The 6 of Diamonds was chosen for this, as it is the easiest card to recognize in the spread. A carefully thought-out handling that results in a hyper visual and fooling routine.

BEHIND THE CURTAIN
2 distort effects create the illusion of you peeking behind the curtain, revealing the Queen in a dramatic fashion. Works with simple color allowing you to combine both gaff cards, the Queen, and basic sleights for an awesome routine. Links up with many of the other gaffs in the Visualies system.

U-TORN
Allows the magician to perform a Torn & Restored routine without trashing any cards! Prepare for the first time and you get the 'torn off' piece (and spare), as well as the magic card that allows it to work. Multiple presentation and handling possibilities. An easy-to-do, dynamic and fooling version of Torn & Restored.

SMASHED
Do a simple color change and smash the Queen to pieces. Gives the opportunity for fun narrative and presentations. Designed to link with other Queen gaffs in this deck, such as the 'Behind the Curtain' or 'Off With Her Clothes'.

4xFOUR
Split the 4 into two two's as the size changes as well as value! Then take the two twos and in an instant, they transform into the four Aces, once again shrinking in size to match their value. Or, show the 4 of Clubs -- then it instantly explodes into four mini Aces. Loads of possibilities using sleights you will already know to make the cards shrink and shrink again. Links up nicely with the 'Mini Me' gaffs.

MINI ME
Based on the same concept as 4xFour, we've extended this to offer 3 cards that allow you to half, then half again in size. Extend your Queen routine from a single trick into a super charged performance. Multiple handlings. Everyone will be able to make the most of these gaffs.

TWISTED KINGS
Based on the classic Twisting the Aces. A few double-facers and a special 'spread' gaff make this sequence achievable for any magician. No tricky sleight of hand -- just a devious set-up and simple handling enables you to achieve this challenging routine with minimal practice.

TURBINE
Uses perception distortion trickery to reveal a force card like never before! Use your favorite force with the Queen of Hearts or 4 of Clubs, then show a strange looking card that is just a jumble. Hold it up and just blow or twist, the card spins and magically reveals the card they were just thinking of. A simple shake and the strange card now becomes their selected card. A treat of physics and biology mixed with magic.

'OFF WITH HER CLOTHES'
Show the Queen, then in a flash, cause her clothes to jump off onto another card! Put them back on in an instant, she's getting shy, and a little cold! Works from a paintbrush-style change and a simple card flip. Use a double backer to get in and out cleanly. Spare clothing card included for alternate presentation. Stupidly good fun and gets hilarious reactions!

TRIUMPHING
Designed to add that final convincer to any Triumph routine. Can be used with a tiny bit of 'stick' to easily hide the card at the end. Carefully thought-out handling and full Triumph routine included. Uses the Queen and 4 again so is also a great card to experiment with and link with the other gaffs -- lots of possibilities. It's the only card in the deck that requires the Optricks Red to perform the Triumph routine.

PRESALE NOTE:This item is available for Pre-Order only.